Earnest Gouge was born in the Muscogee (Creek) Nation, Indian Territory, around 1865. In 1915 he was hired by John R. Swanton to write 29 traditional stories in the traditional Muskogee alphabet. Read more about Gouge

In the 1990s Jack Martin came across the stories in the National Anthropological Archives and made photocopies of them for Margaret Mauldin, a Muskogee instructor at the University of Oklahoma. Martin, Mauldin, and Mauldin’s sister Juanita McGirt then set about editing and translating the stories. That work was published as a book in 2004:

Proceeds from these titles have gone to Felix Gouge on behalf of the Gouge family.

The following recordings are of Margaret McKane Mauldin reading the stories.

1. The three brothers and the spotted horse. mus08001-analysis

13. Rabbit traps Lion on the other side of the ocean. mus08013-analysis

Totkv mocvse (new fire) is a term used for the ceremonial fire marking the rebirth of a tribal town. We hope this work will rekindle interest and pride in the Creek language and in Earnest Gouge and other keepers of Creek traditions.

We are grateful to the Smithsonian Institution’s National Anthropological Archives for allowing us to publish these texts and for making photographs and photocopies of the originals available to us.

Felix Gouge provided enthusiastic support for the project, shared his family history, and showed us his grandfather’s home, church, and ceremonial ground. 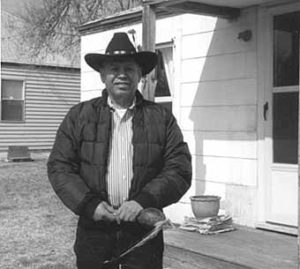 Edna Gouge introduced us to other family members and provided encouragement.

The National Endowment for the Humanities (under grant RT-2156694) and the National Science Foundation (under grant SBR-9809819) funded this research as part of a larger project to document the Creek language.

To all who have helped, we say, Mvto!